Pick One free game for Android phones and tablets, iPhone and iPad

Algotech Apps presents new free game Pick One for Android and iOS! You can test your skills for hours and hours in this addictive and dynamic game! Make sure to always choose the right answer in this multiple difficulty levels game and prove to the world that you are NUMBER 1! Keep playing and you will encounter many surprises during the game! This game is suitable for all ages and genders, but it’s mainly designed for persons older than 14 years, because to get a great score you will need to stay concentrated, focused and quick!
The first game from Pick One series follows the concept of simple but challenging games, where the basic task is to choose between two or more options and find the right answer. The main idea is to keep the game simple, so no difficult strategies are necessary. You just play this game for fun, and to prove you can do it better than the rest of the people out there.
First in line of Pick One games is all about making fast decisions and answering the simple question: ODD or EVEN? The player needs to count the objects on the screen as fast as he can and tap on ODD or EVEN button! The faster the player chooses the right answer, the more points he gets. So, make your count as quick as possible! You can also play against your friend, if you buy Duel Mode.
To make things harder, players will encounter many surprises while playing. The first obstacles are the BOMBS! The player has a couple of seconds until explosion. If the bomb goes off, objects will be thrown all over the screen and the count will be more difficult. Also, players will have to deal with other obstacles later in the game, like: increased number of objects, movements and later random movement of objects. 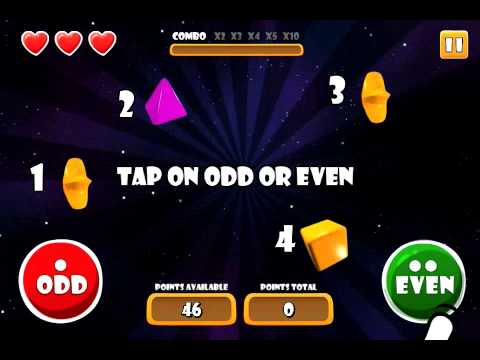